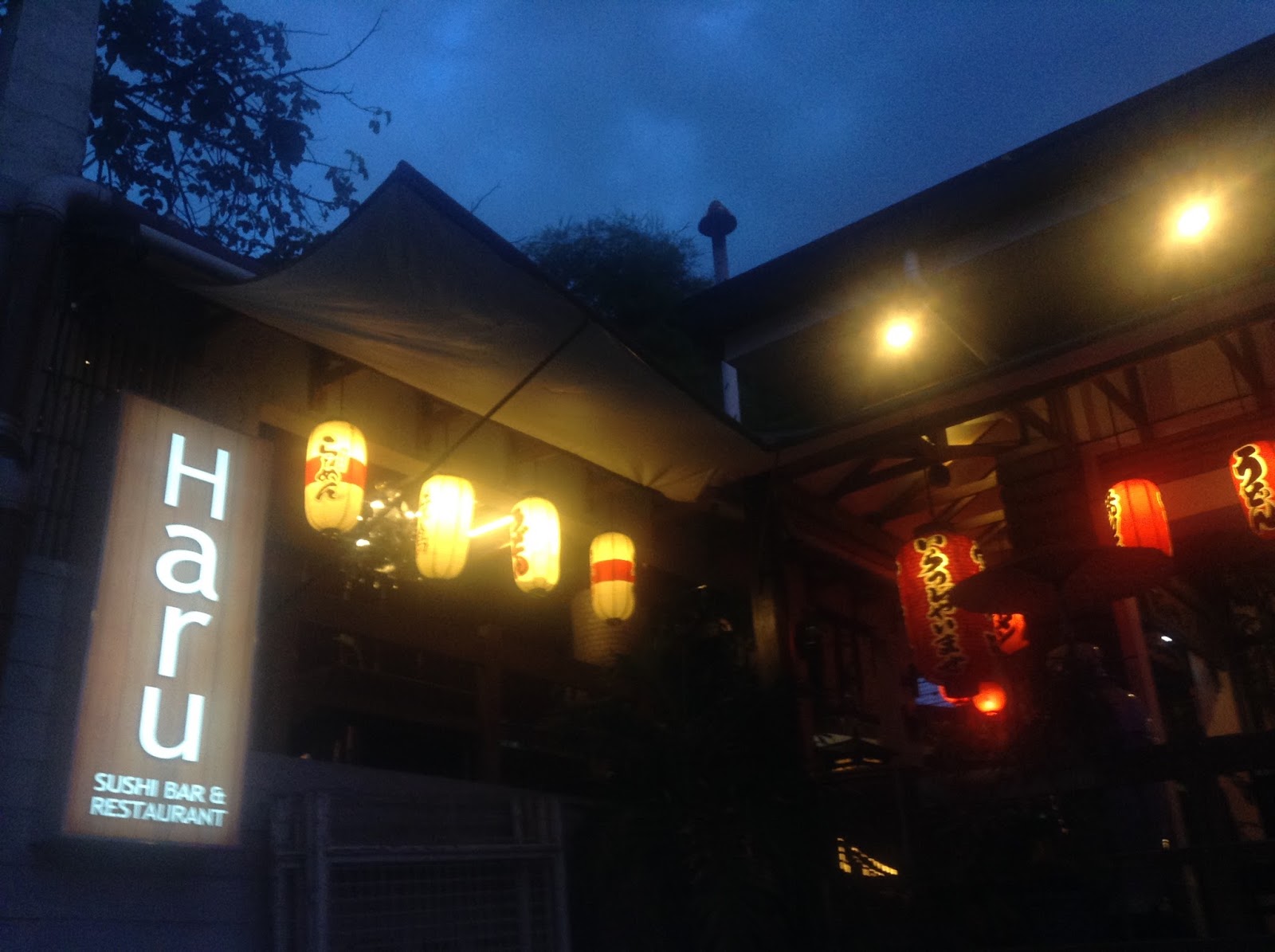 Japan is the first country I would love to travel to when I finally get a passport. I've said it here before how bad I wish I lived there instead. When I see pictures of places, may it be cities or even provinces, in Japan, something inside tells me that I belong there.

Have you ever felt like that about a place before? It's weird! I think it's because I was obsessed with anime as a kid? Maybe because watching Japanese cartoons was my ultimate escape back then that when I see pictures related to Japan, everything just feels weirdly familiar?

I really don't know! It's not like I'm obsessed about going Japanese - I don't even know much about their culture. In fact, I haven't even tried authentic Japanese food yet. Obviously, Tokyo Tokyo and Nissin Yakisoba don't count, right?

So one Saturday afternoon, a week after our Cebu trip, I suddenly remembered that not-so-rameny ramen I had on our first day at Malapascua island. BF and I were so hungry when we got there so the first thing we did was search for food. And for some reason, we ended up at a "Japanese restaurant" and I ordered their "ramen".

Long story short, I wasn't completely happy with my first ramen. It was filling [or I must've been really hungry so I thought it tastes okay?] and the soup was okay but I noticed that it's not how the ramen looks like on foodies' Instagram posts. Haha!

Yeah, I'm heartbreakingly new to Japanese food that my only basis for judging whether a ramen is good or not is if it looks as good as those famous Instagram food posts!

So back to that Saturday afternoon, I downloaded the Zomato app on my iPad and searched for a good Japanese restaurant to go to in Pasig - the city closest to my place.

And that's how we found ourselves at Haru Sushi Bar & Restaurant in Kapitolyo Pasig to get our ramen fix! 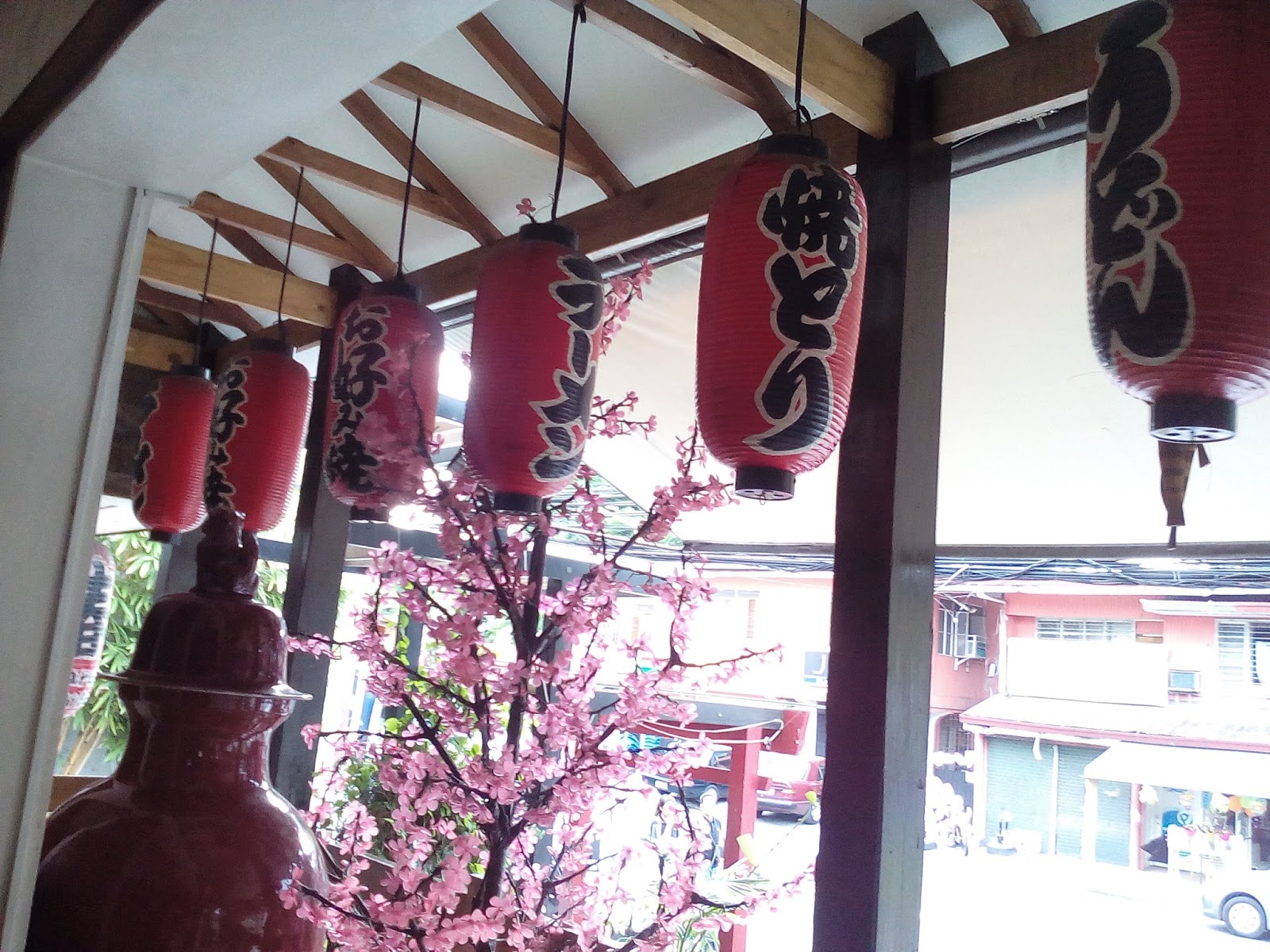 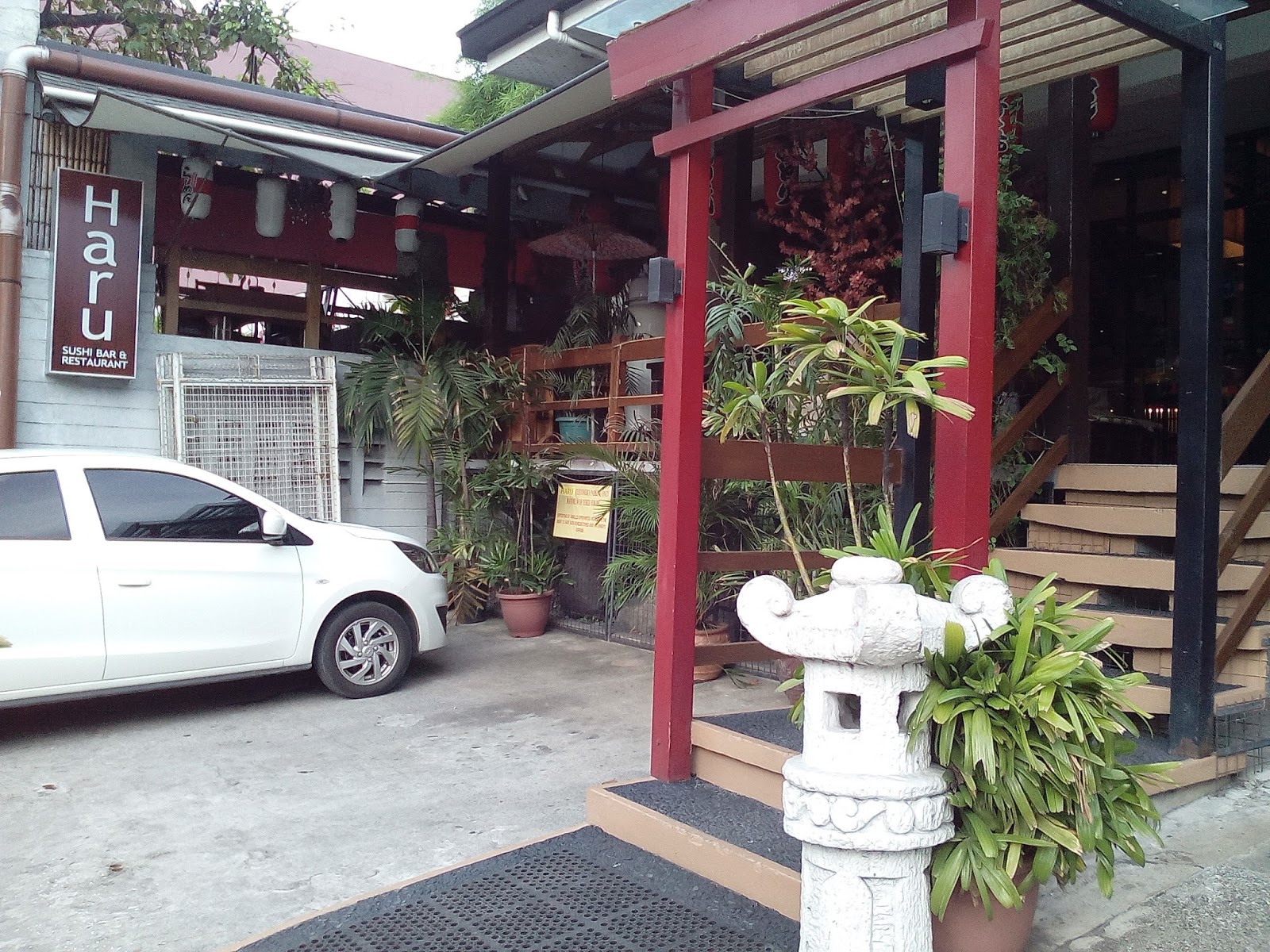 We arrived 15 minutes before 5pm and it was still closed. The parking guy told us it'll open in a bit so instead of waiting outside, we just walked around the area to search for an ATM. (You know, in case this ramen craving ends up wreaking havoc on my wallet.) 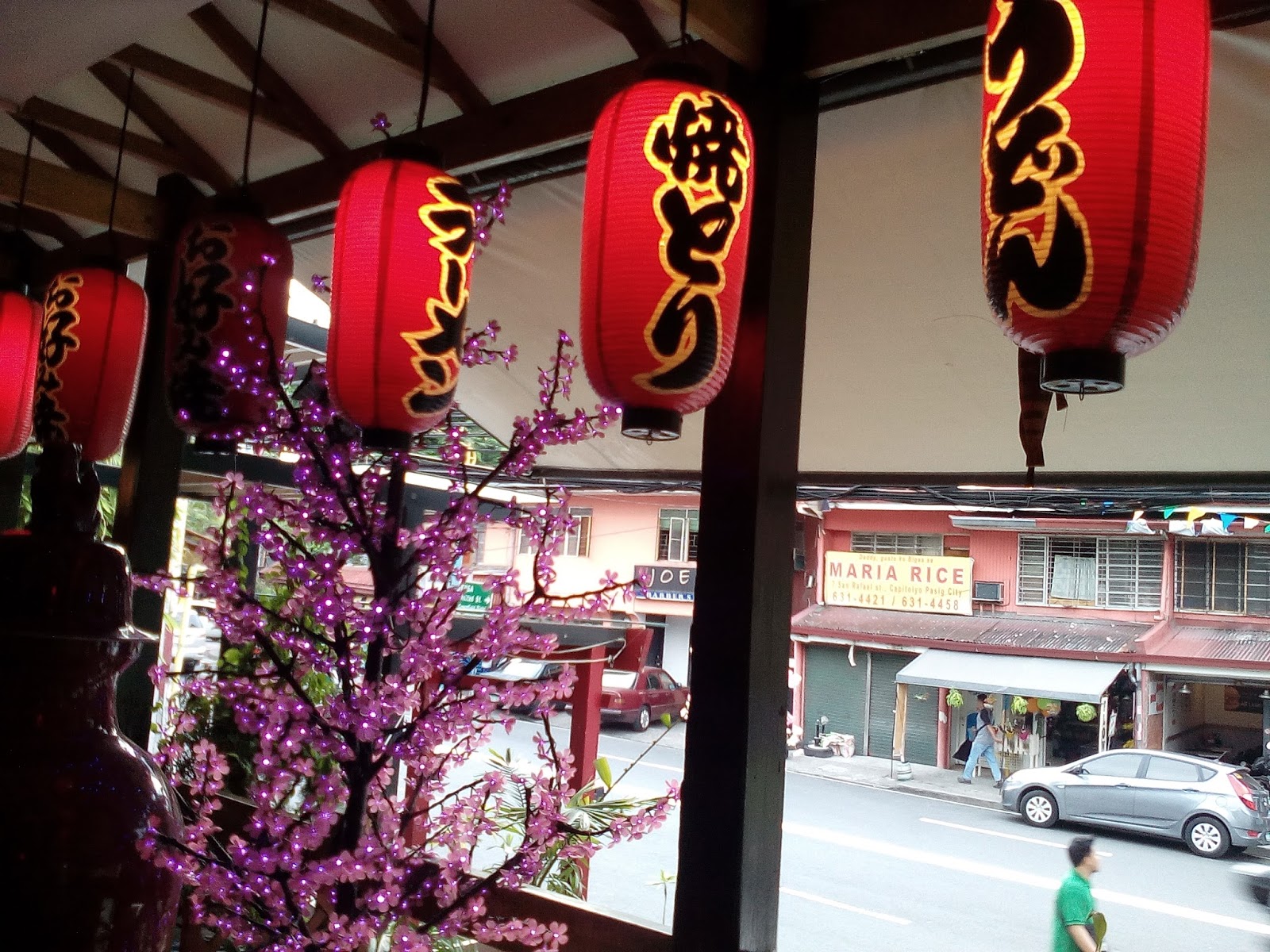 I haven't even gone inside yet but I was already loving the place's ambiance from outside! For a moment, I forgot that I can't get a passport yet *sobs* and felt like I'm in Japan already!

And boy was I pleased when the clock hit 5 and we were finally welcomed inside! 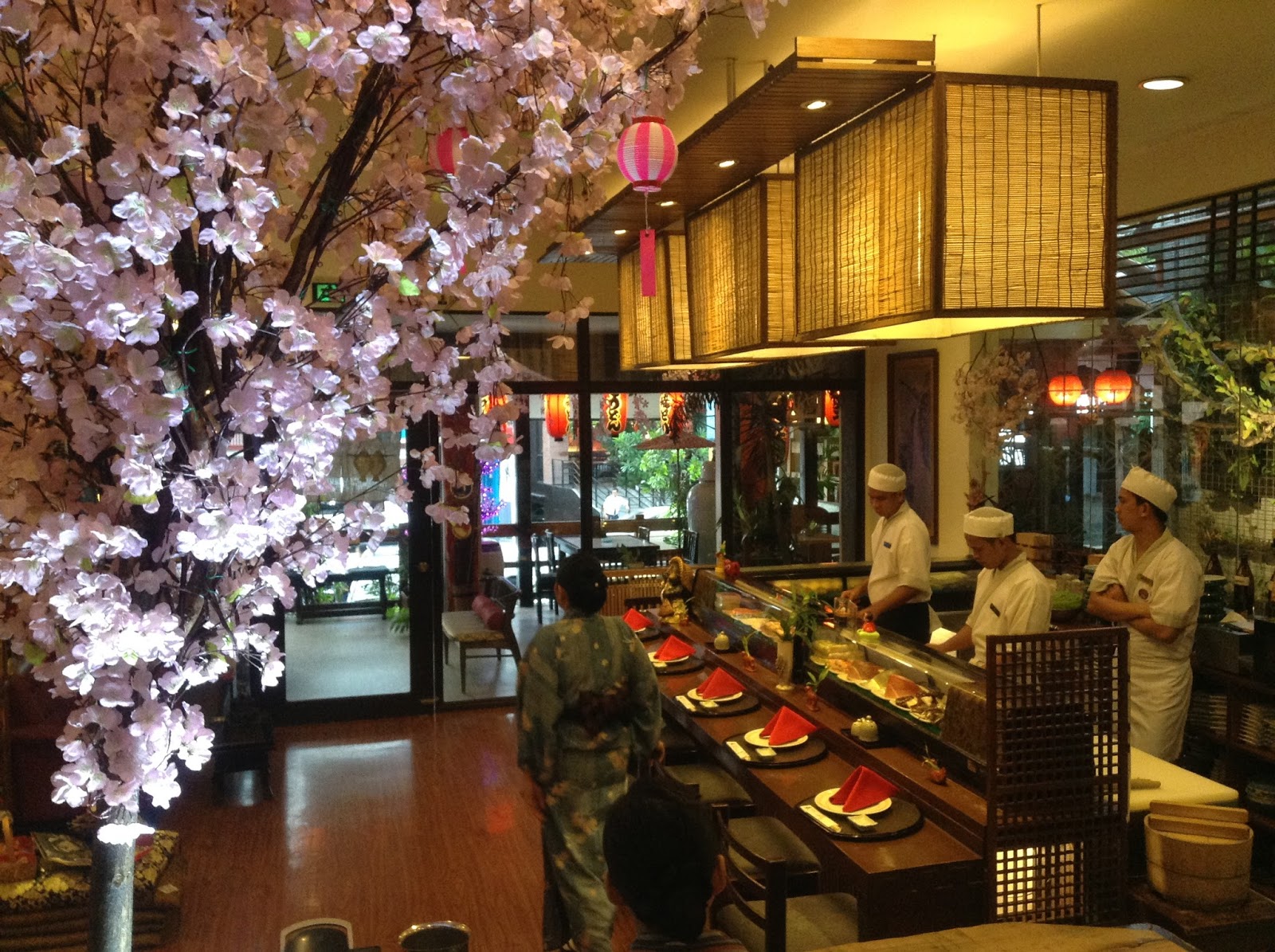 There's a sushi bar and the waitresses were dressed in kimonos and they greeted us in Japanese! 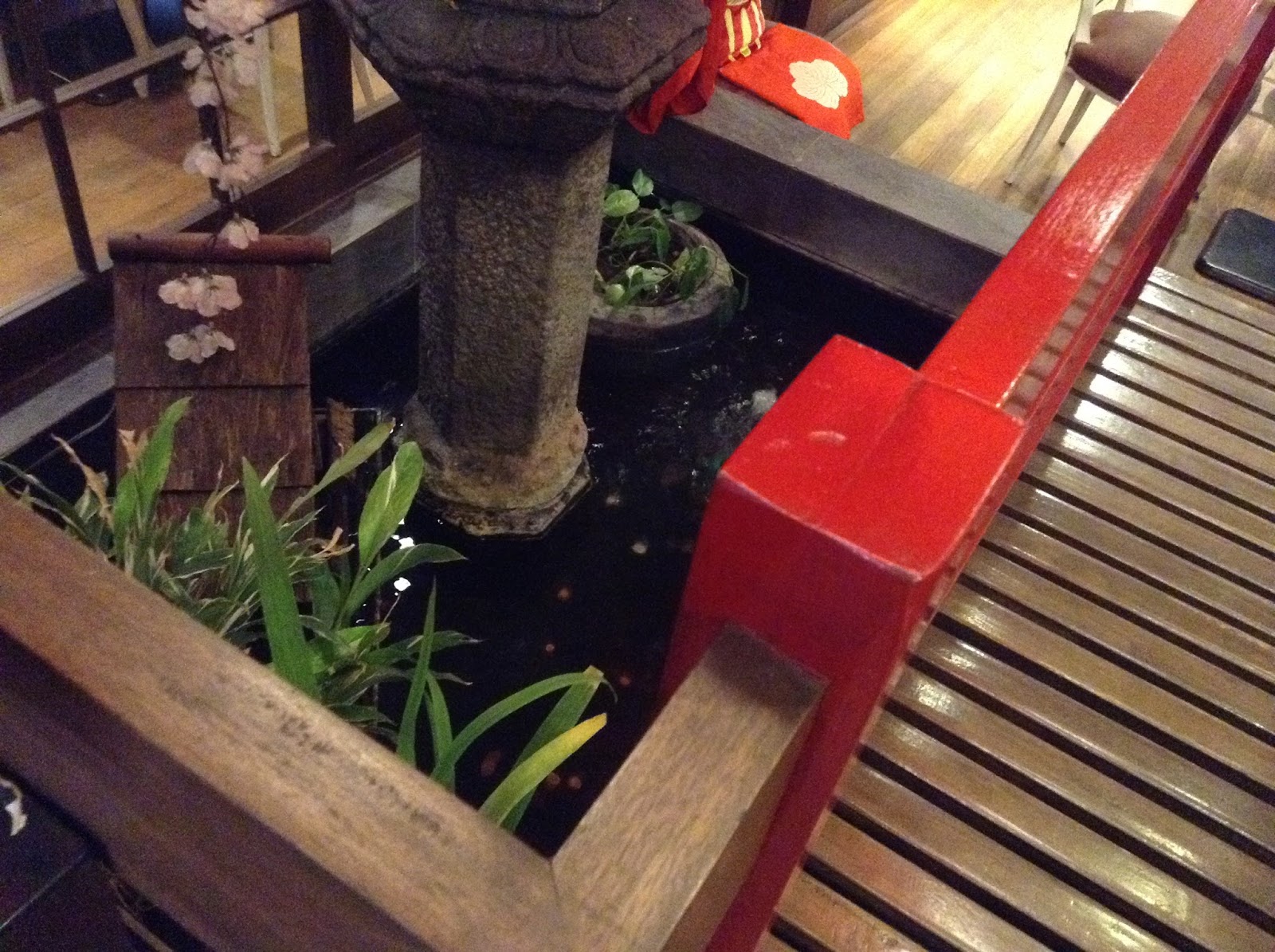 There was also a small pond with fishes in it and also a tiny bridge just right beside our table! 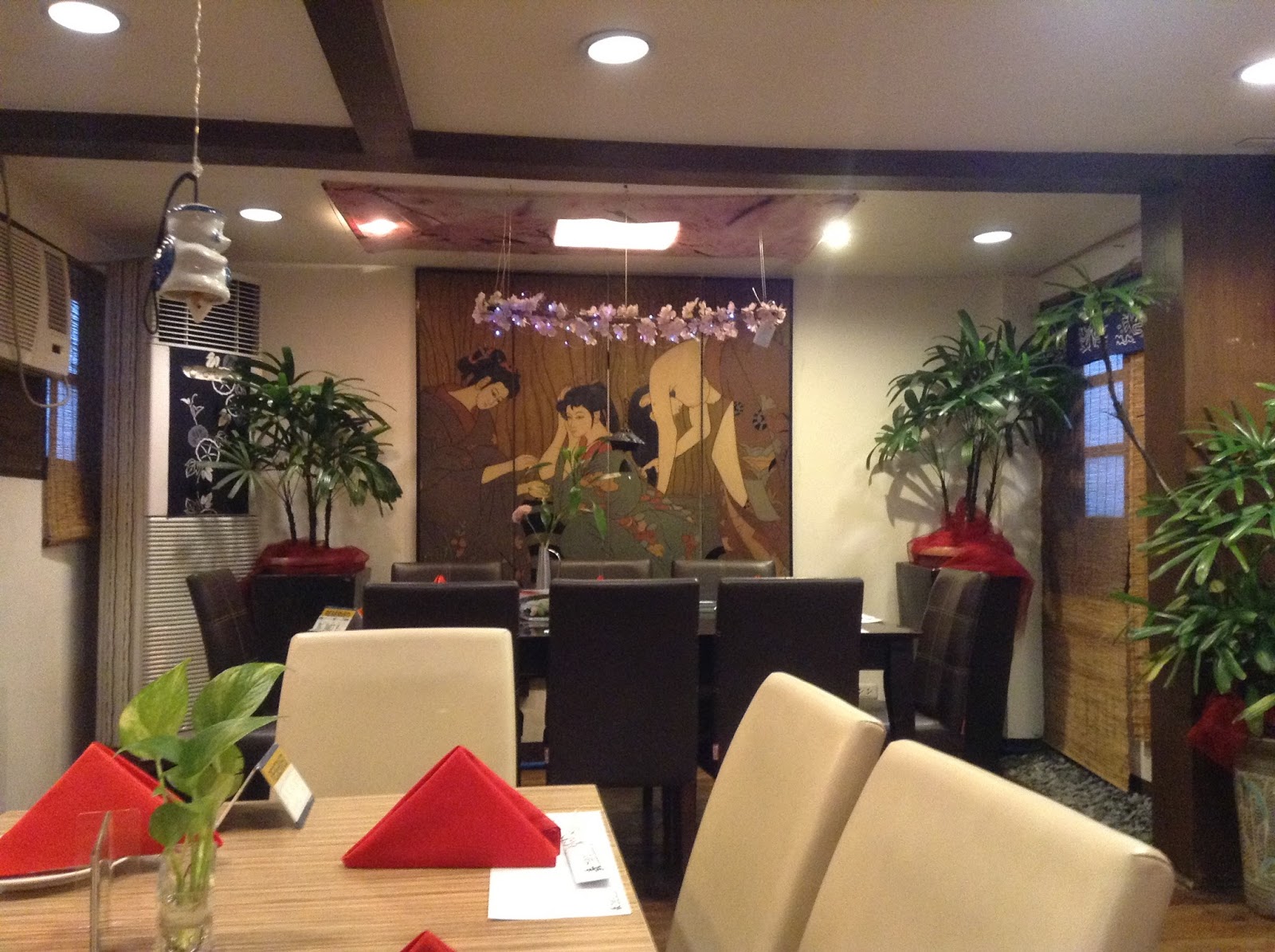 I was thinking we'd be sitting on the floor like in most Japanese restaurants I've seen on TV but other than the chairs that aren't very Japanese-y, the entire place is filled with Japanese stuff! 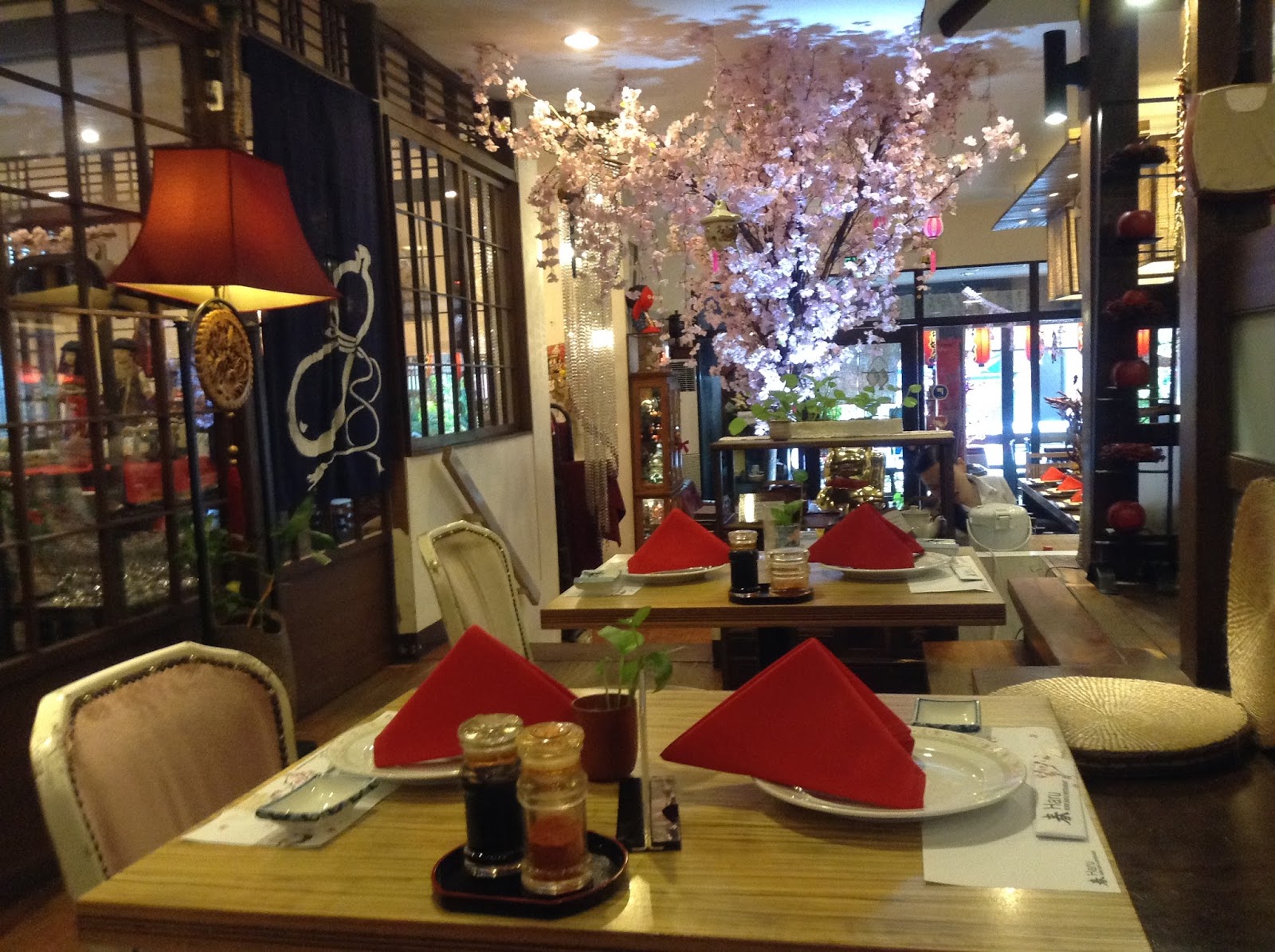 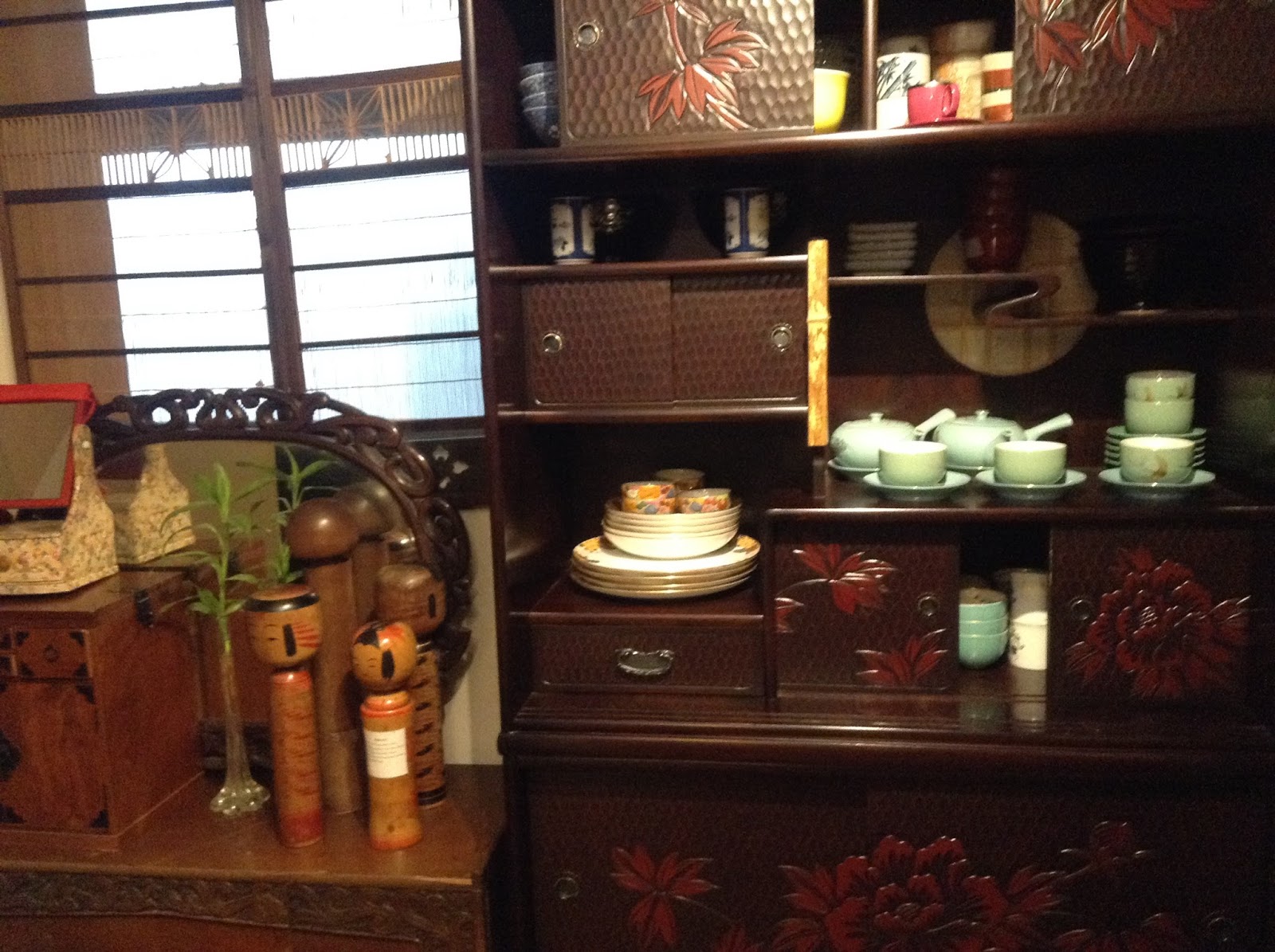 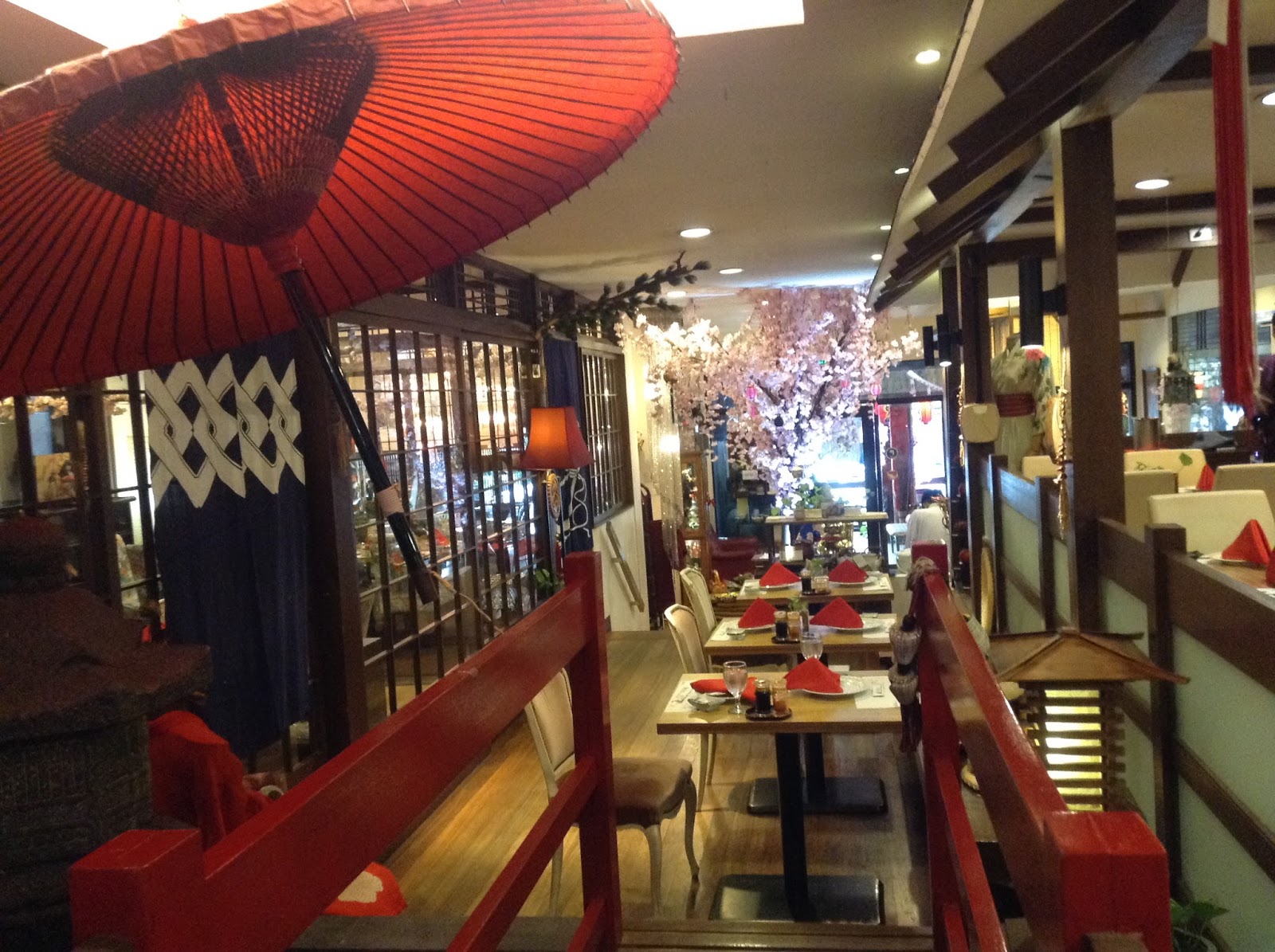 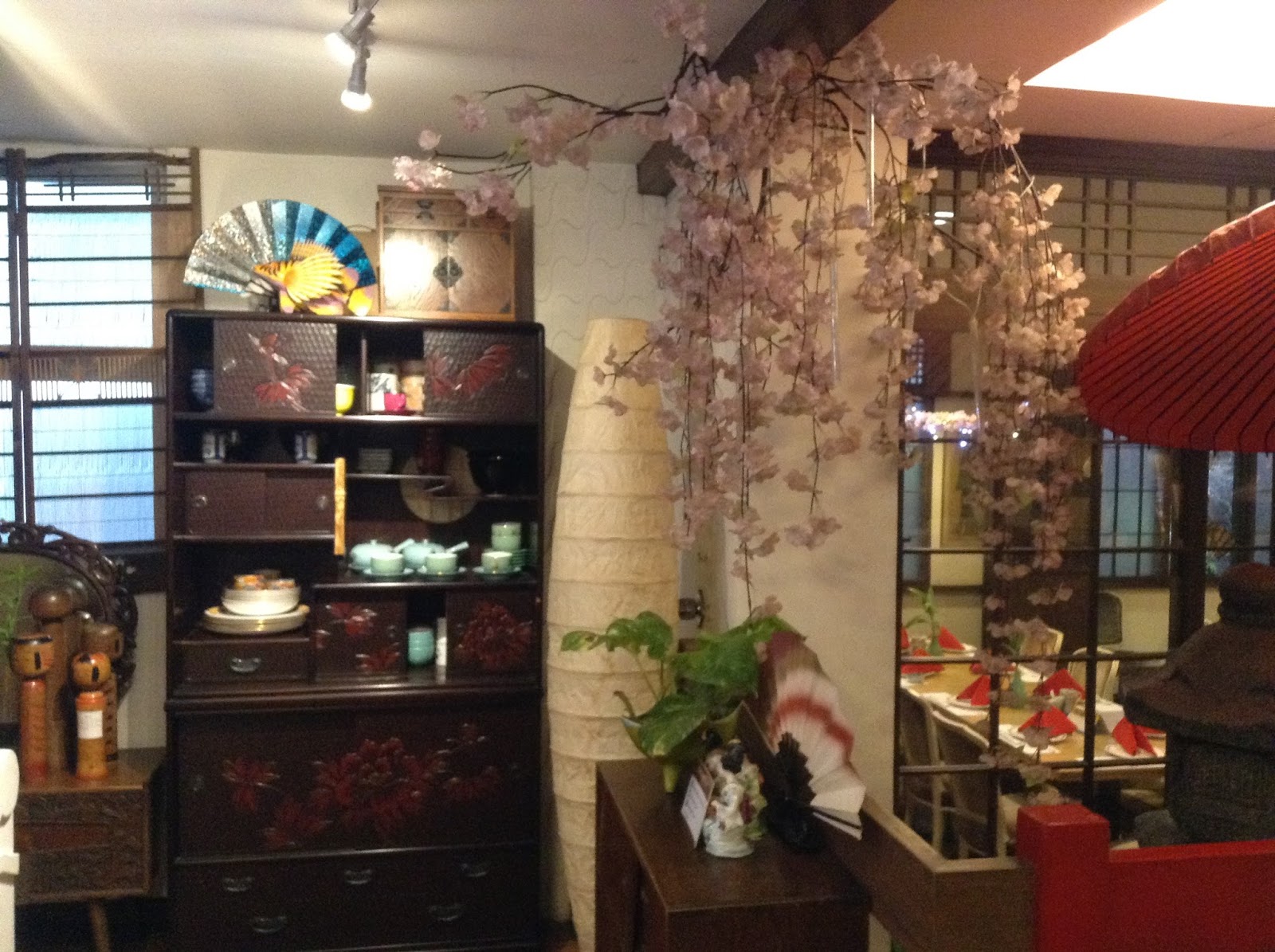 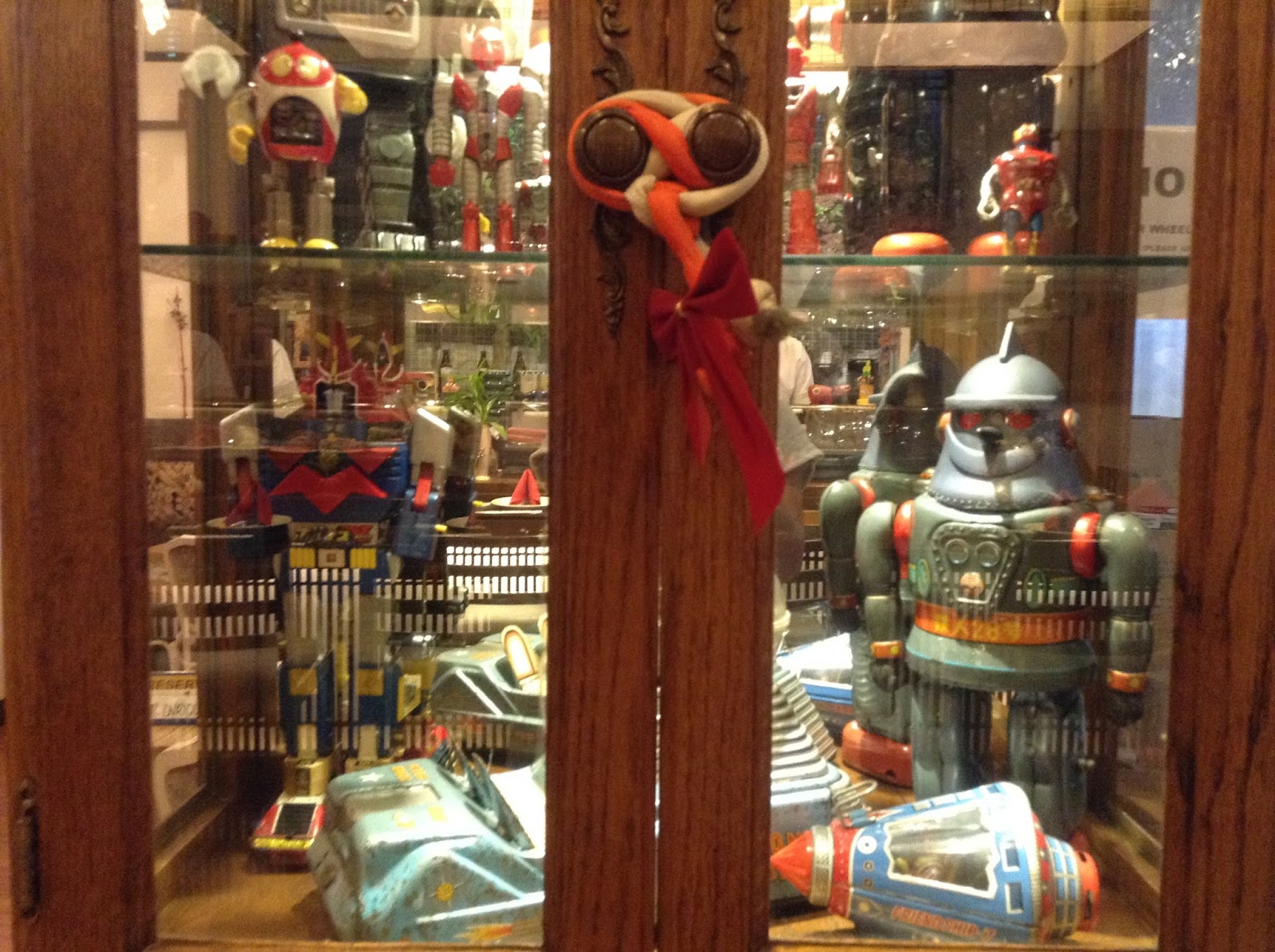 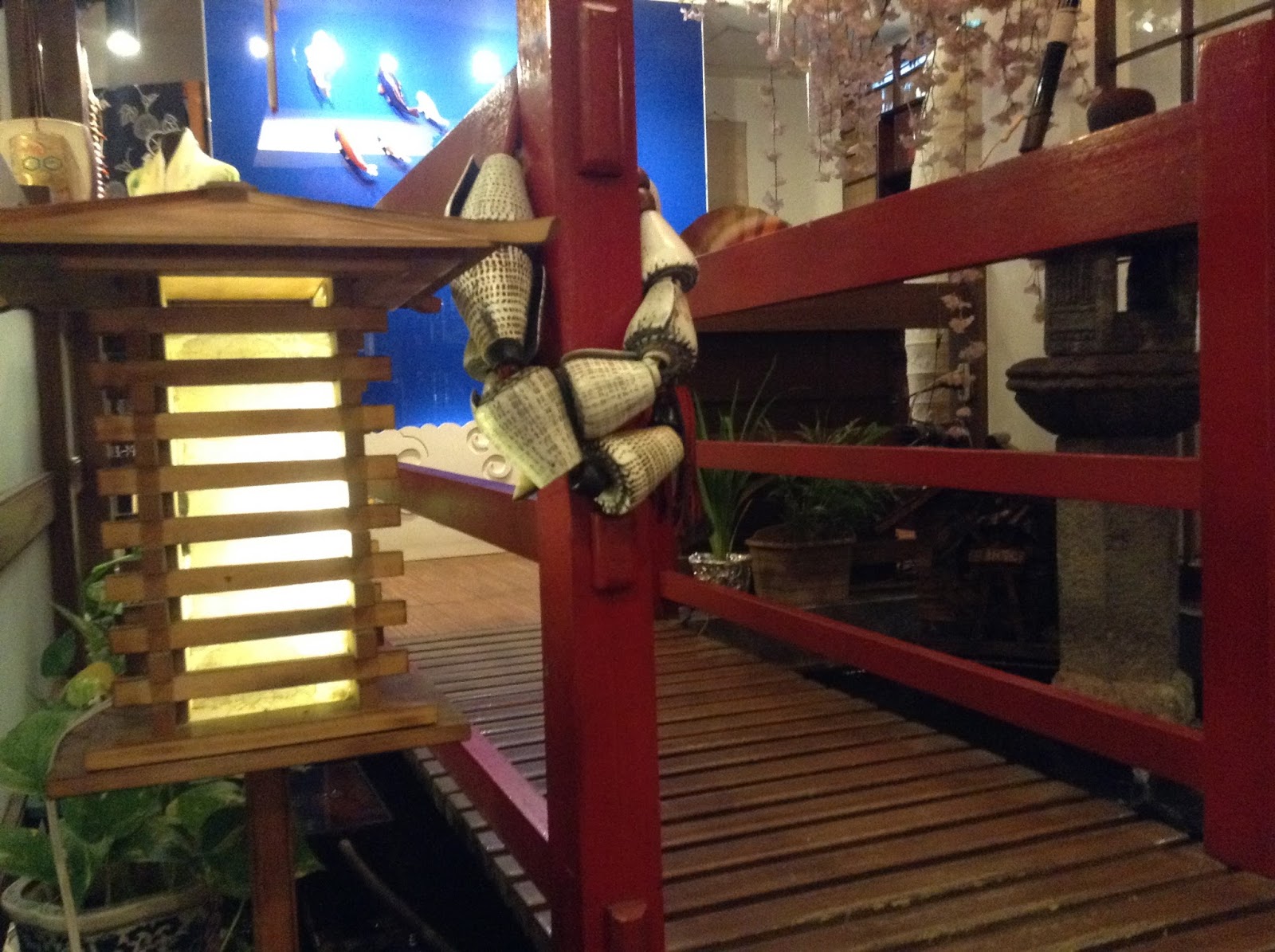 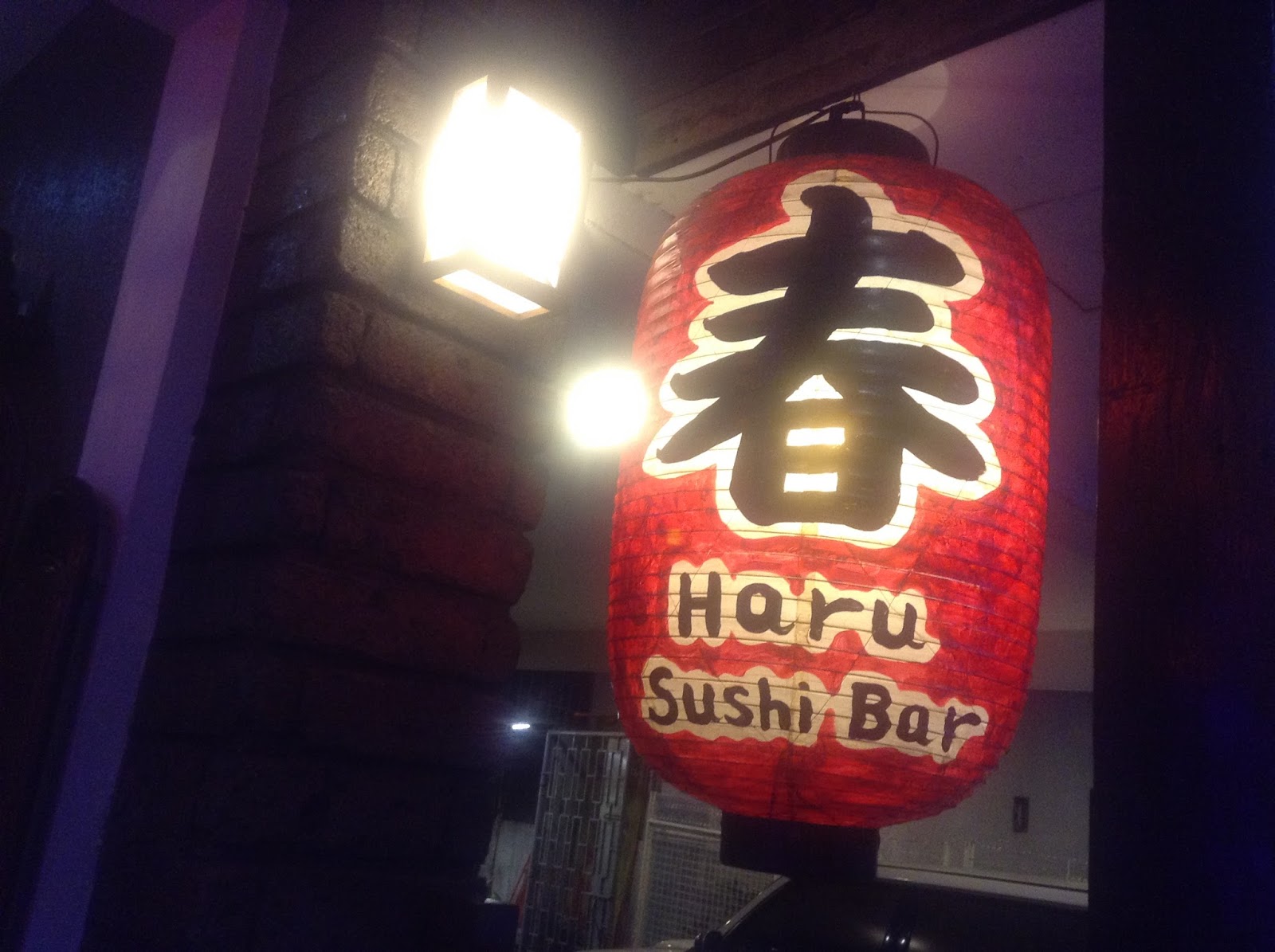 The lamps outside look 10 times cuter at night! 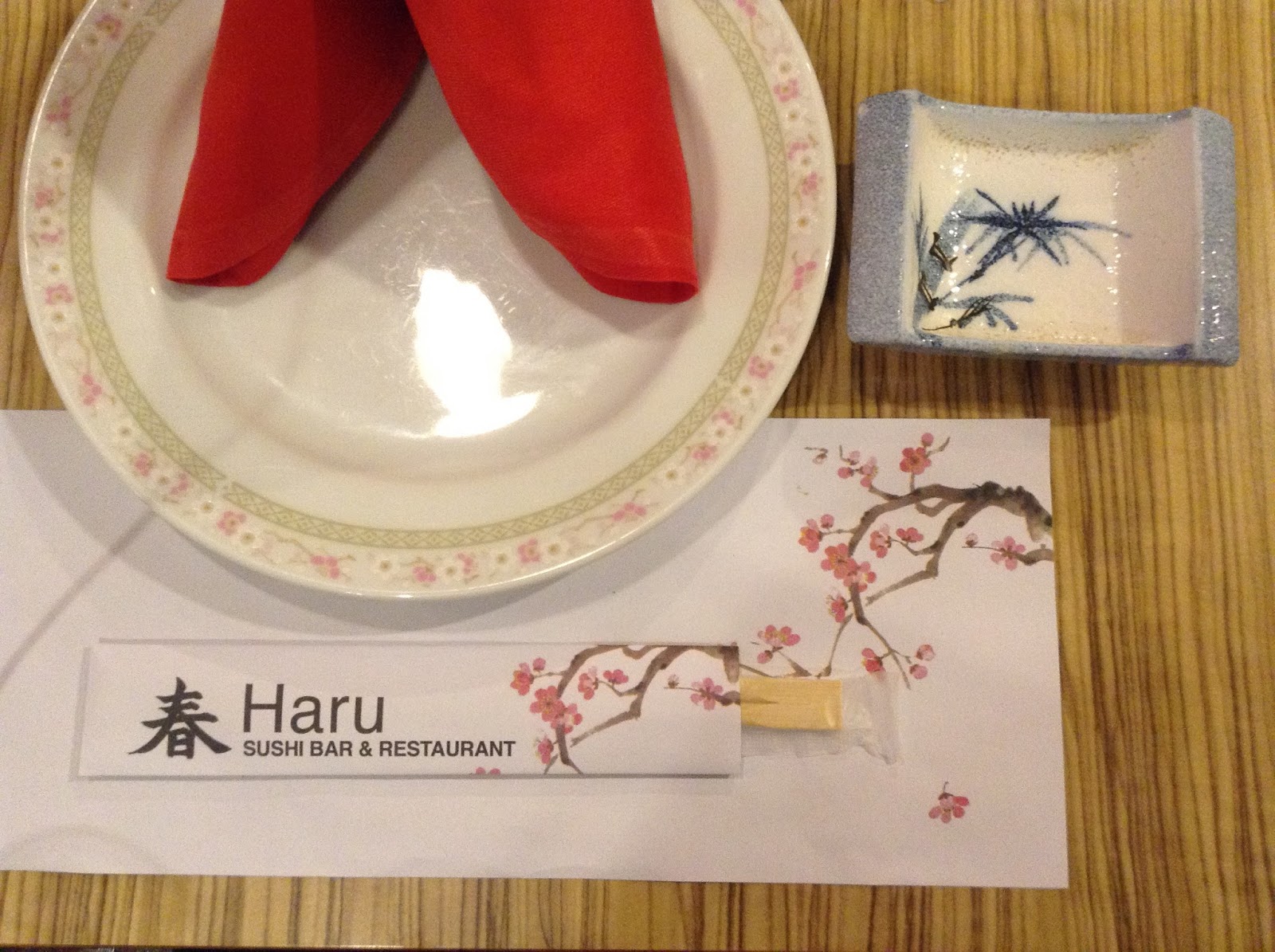 Boyfriend had Gomoku Ramen, a combination of chicken, shrimp, quid, boiled egg, straw mushroom, and vegetables.
And I had the Haru Ramen, a combination of beef, mussels, shrimps, squid, young corn, mushroom, bamboo shoot, cabbage, and Japanese fish cake.
I kinda had a hard time choosing what to order because their menu didn't have pictures and hello I'm a ramen newbie so I was literally just eenie meenie minie moe-ing the whole thing. I ended up choosing this one because it's named after the restaurant so I assumed it's their best. Haha

We wanted to try the other kinds of sushi but like I said, it was hard to choose from the menu that didn't come with pictures. And it's twice as hard for someone who hasn't really tried Japanese food before. So we settled for their California Maki Premium which was a little too expensive for the not-so-premium taste. Maybe we should've chosen to be seated at the sushi bar so we can easily pick our sushi. But, well, next time!

We agreed to get more food after we finish our ramen but we almost didn't finish our bowls because the servings were huge and were already very filling.

Our tummies were very happy! Boyfriend said his Gomoku Ramen was really good and I loved my Haru Ramen as well so I have to say the positive reviews at Zomato were right!

Needless to say, it was a very satisfying "first legit ramen experience" for me. Well, for the price, it had to be, right? We loved our drinks too! They were perfect! Should've ordered something else instead of the California Maki though. 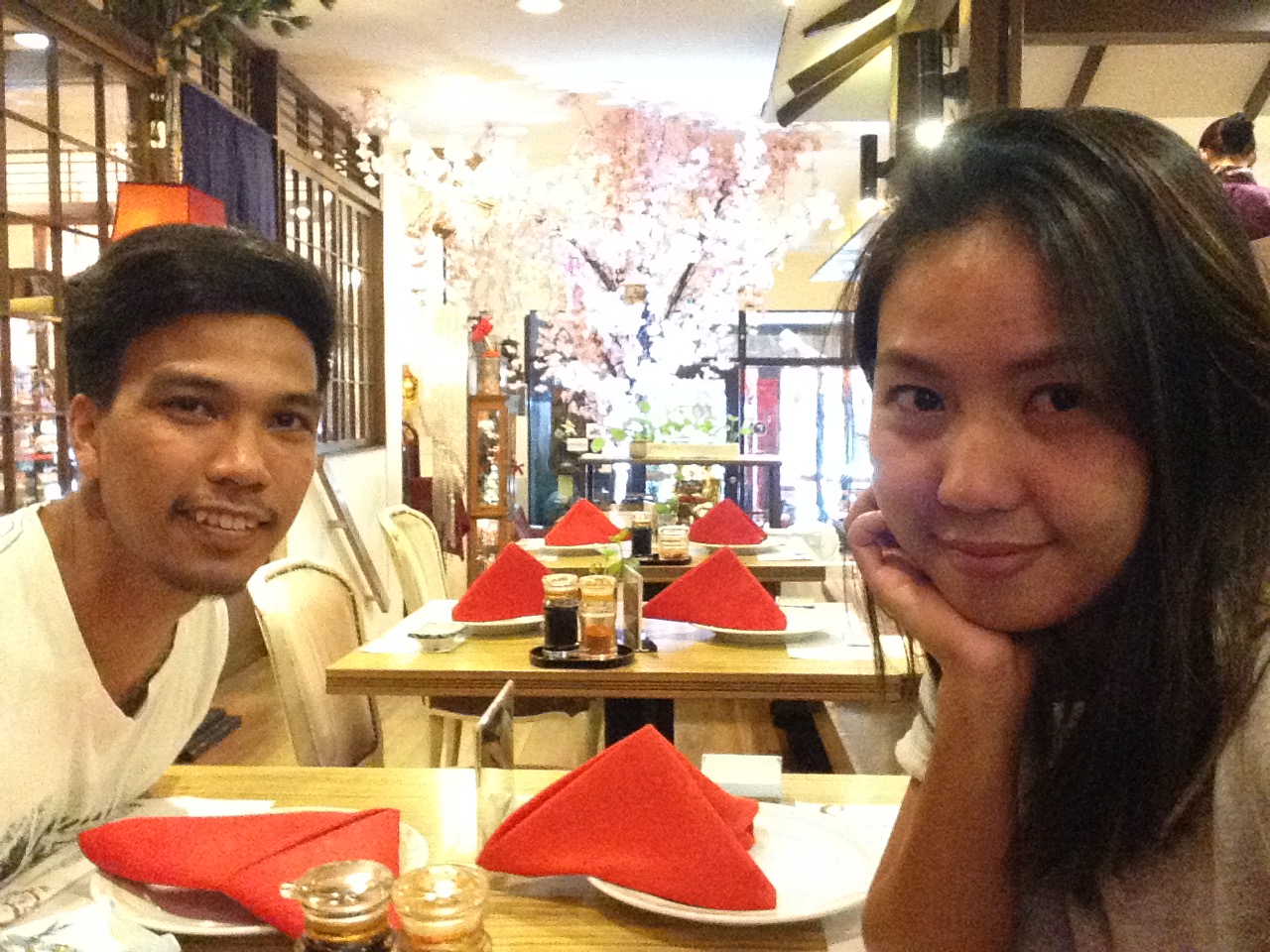 But all in all, the food was good! Kind of expensive so maybe next time, it'll be better to ask about their best-seller so choosing from the menu won't have to be so hard. But  it's all good. We can always go back to try those we haven't yet! 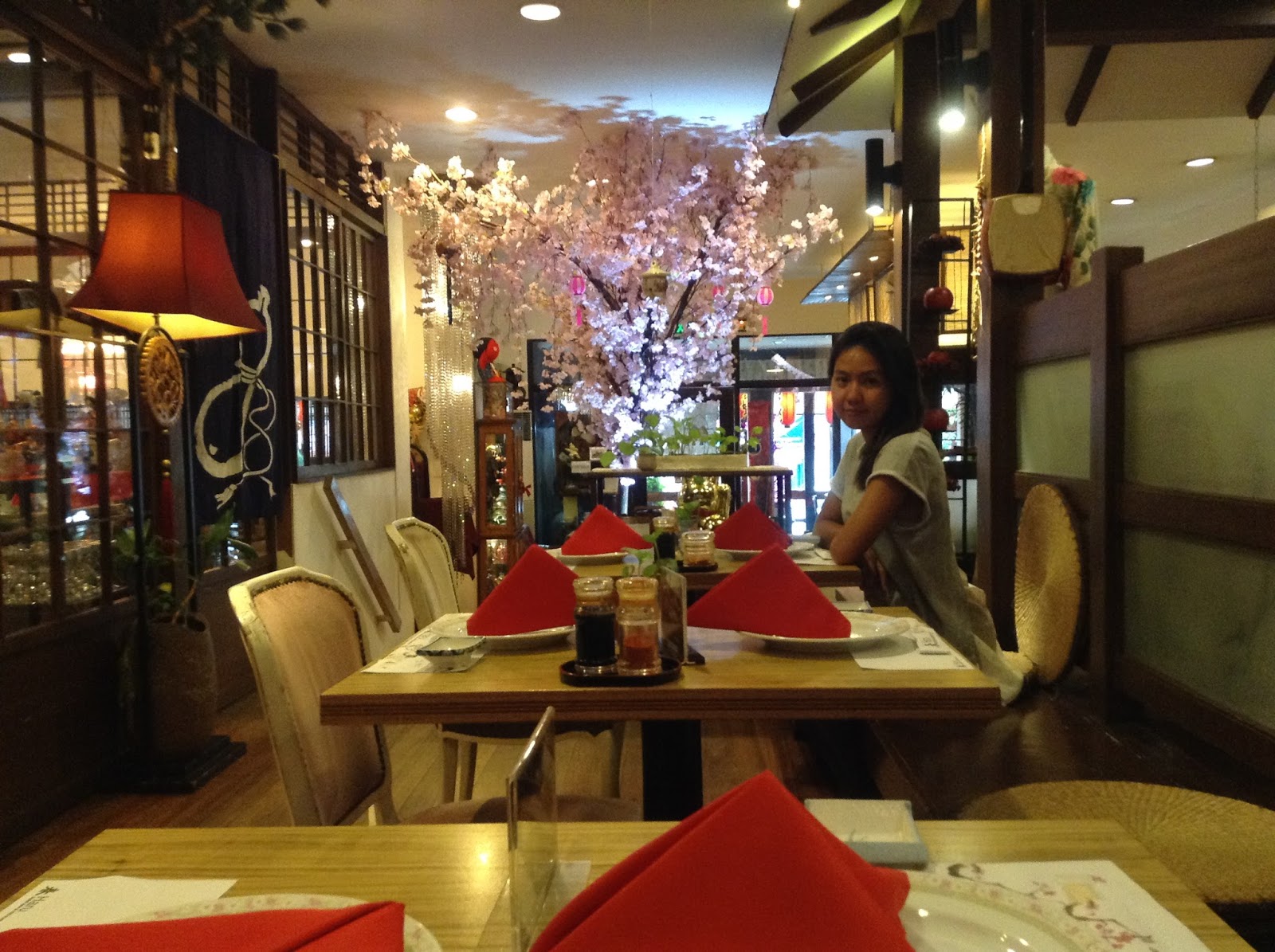 So there you have it. My not-so-happy first ramen memory in an island in Cebu has been replaced by a much better one and I have Haru Sushi Bar & Restaurant to thank for that. I think I should go check out more Japanese restaurants and try more Japanese food so when I finally make it to Japan, I won't feel like a complete alien!

They are open Mondays thru Sundays from 11 AM to 2 PM and from 5:30 PM to 10 PM. If you're going on weekends, it's advisable to be there as early as 5PM so you can still get a proper parking space.

When we left that night, the small parking spot in the front was already full and there was even another car parked right in front of us, blocking our way. We saw a lot of reserved tables that afternoon and a lot of people started coming around 6PM so if you'd like to make a reservation, here is the number to call: (632) 631 0597

BTW, sorry for the bad photos. Only took them with my phone and iPod and wasn't even planning on blogging about this but since we were able to take enough photos for a blog post, I thought it'd be great to share it here!

Like I said earlier, I'd really love to explore Japanese cuisine so if you guys know some really good Japanese restaurants, please please do share them to me! Also, what other Japanese dishes do you suggest I try? And have you guys tried sushi? The raw fishies? What are your favorites?
Email Post
Labels: Niknok Eats 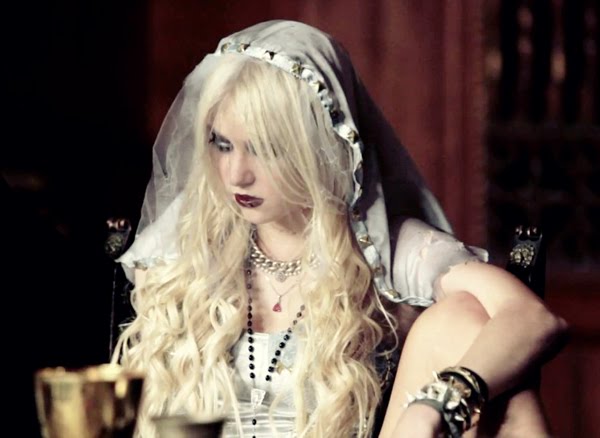 Miss Nothing, Miss Everything 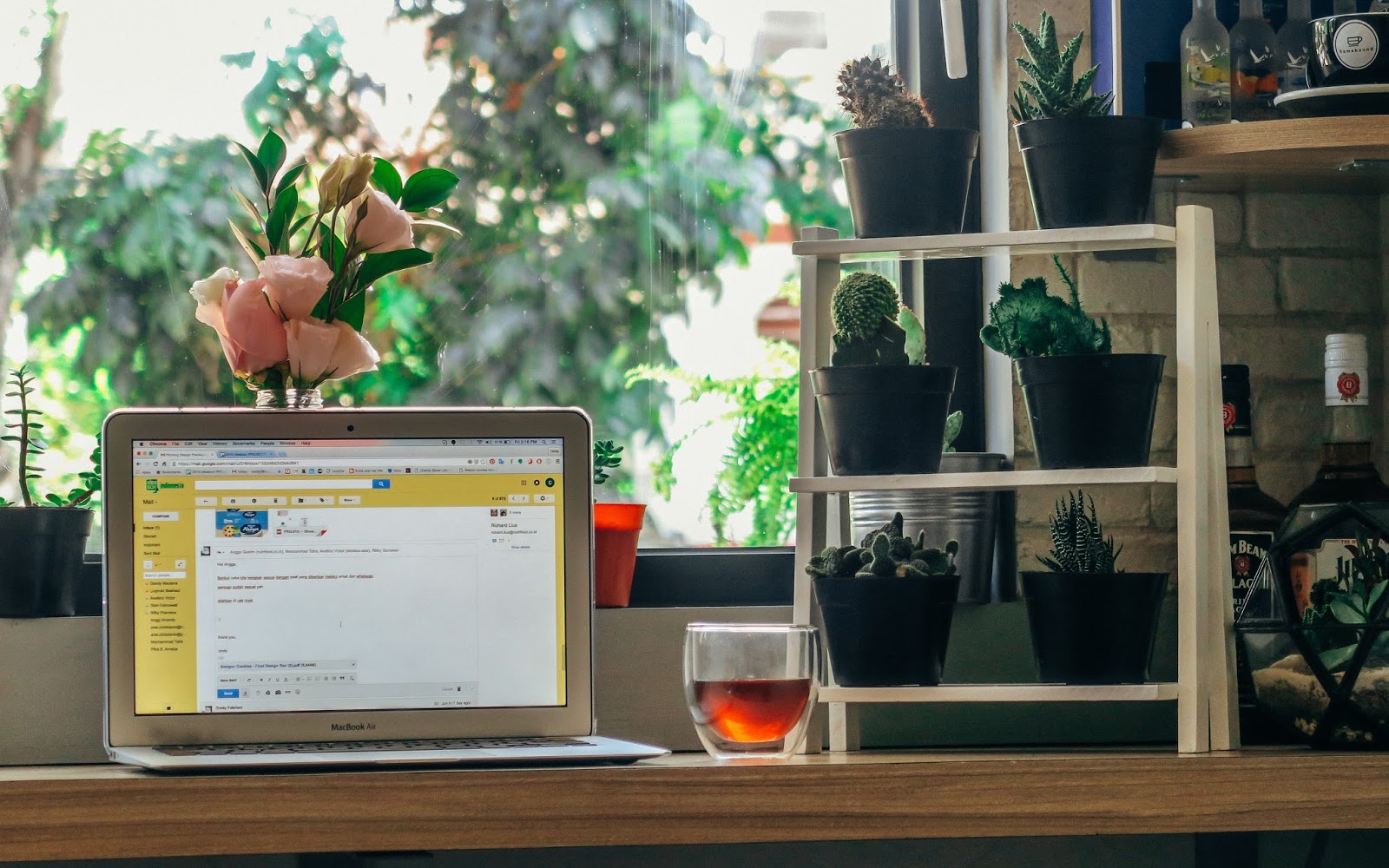 How Working From Home Changed My Life 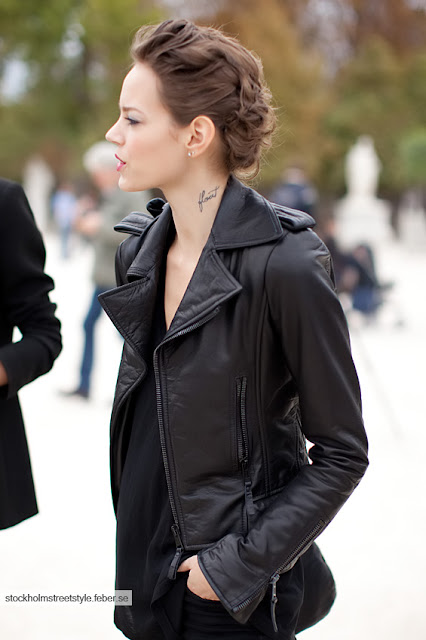 Visit profile
Welcome to The Life of Dominique. A mean old thing from the Philippines. Breaker of Rules. Mother of Cats. Non-Giver of Fucks.